Clarisse Le Bihan had been a professional for 13 years when she signed for Angel City in the spring—but when she tuned in to the Challenge Cup to watch her future teammates, she’d never seen anything quite like it.

“I remember the game against San Diego,” she says. “I was in front of my TV going, ‘Wow, how can they do that?’ I was so impressed by the intensity of the game.”

The 27-year-old veteran of the French Division 1 Féminine—most recently at Montpellier FC—was finding out what many internationals know in theory, but don’t really get until they see it: the NWSL is more competitive, more intense, and faster-paced than any other league in the world.

It’s a departure from D1F, where two clubs, Olympique Lyonnais and Paris Saint-Germain, predictably dominate a table that includes clubs that aren’t fully professional. “It’s difficult, I think, for the small clubs, because it's always the same,” she explains. “It's repetitive. Every weekend you can predict the results, and here you can really not.”

That’s been well borne out by the first two and a half months of Angel City’s season, which have seen the club lose to 11th-place Orlando Pride one week, then beat the reigning champion Washington Spirit on the road the next. It’s an adjustment for any player new to the league, but Le Bihan wanted the challenge.

Born in 1994, Le Bihan was entering her teen years just as the French national team was emerging as a contender internationally: in 2011, the team made it past the group stage of the World Cup for the first time, qualifying for their first Olympics in 2012. French players like Camille Abily were gaining recognition. But the US—even as it struggled to establish a domestic league—was on another level. “When I grew up,” she remembers, “[we saw] the Americans as champions.”

Despite the emergence of the professional game, opportunities for girls to play in France—which has no equivalent to Title IX—were still sparse.Growing up in Quimperlé, a city of 19,000 in Bretagne, there were no girls’ clubs. “It was just me in my city [who played soccer],” she says. At tournaments at the end of the season, another team would occasionally have a girl on the roster; that’s how she met her best friend, Charlotte, who played at a club half an hour away. “We hated each other,” she laughs, “because we both wanted to be the only one.”

Her teammates, though, were all boys—and while she was only on a boys’ team for lack of other opportunities, she has fond memories of her childhood club. She sometimes faced sexist remarks from opponents, but her teammates had her back. “We were all fighting for each other,” she remembers. “Each time we were starting a game, the opponent would say, like, ‘Oh, they have a girl, so we are going to win.’ So [my teammates] were fighting for me. It's a small club, a family. They were really my friends.” She was sad to leave them behind when she left the club.

That move had to happen eventually, though. When Le Bihan turned 14, she moved to a women’s club, Stade Briochin (now called En Avant Guingamp), an hour’s drive away from home. She went straight to the senior women’s side after spending preseason with the team.

“I think that year was the start of everything for me,” she says. The move was exciting—“I was playing against women I’d seen on TV,” she remembers—but it wasn’t easy. Playing with adults, she was treated as an adult, even as she had to fit training in around school. She had to grow up fast, learning to manage the emotions around a bad performance or a tough loss. But, she says, “I started to believe in myself.” 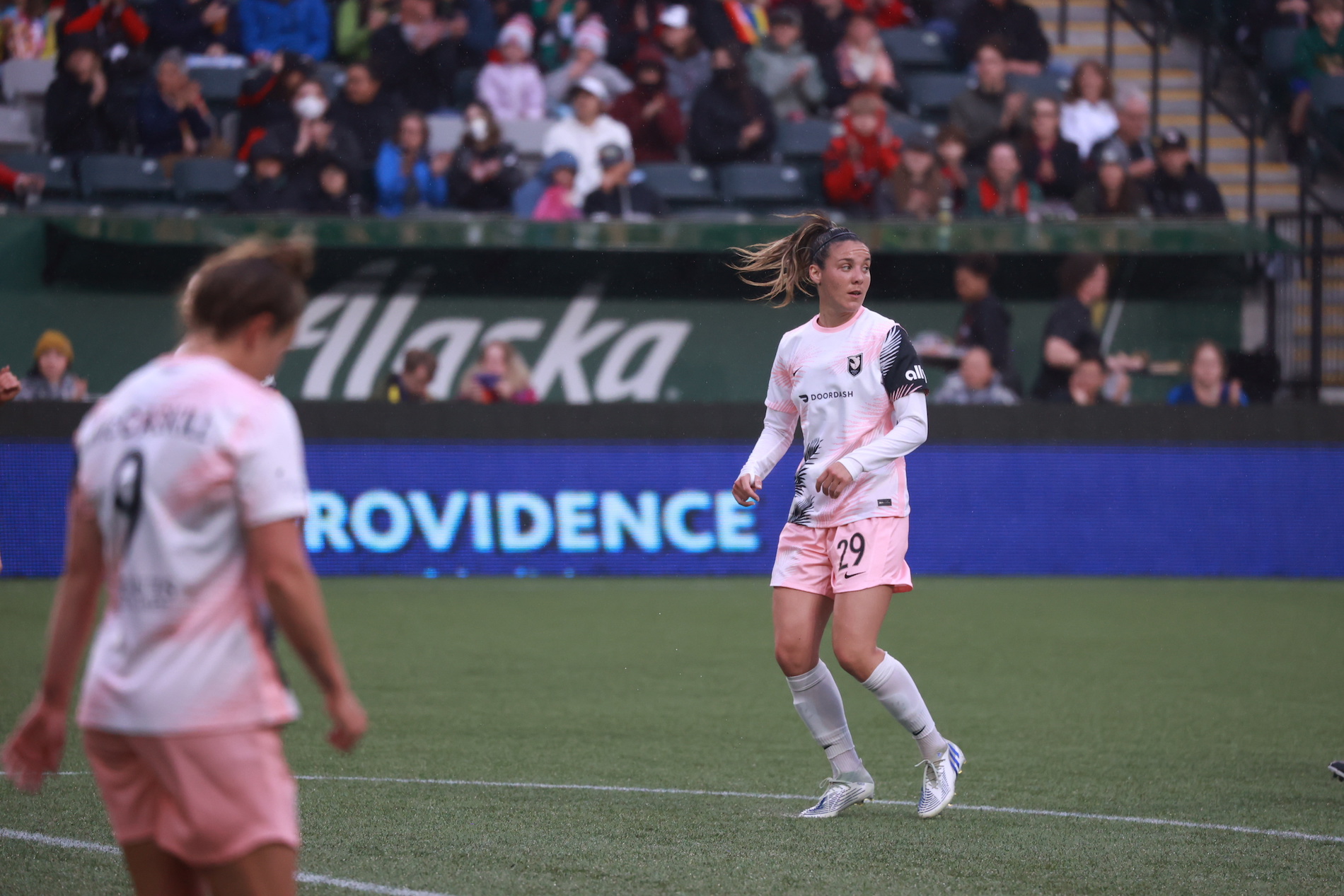 That quick learning curve helped Le Bihan grow into the player she is today: a versatile, technically proficient midfielder who can shoot and pass with either foot. Early in her career, she played as a second striker or a No. 10, later spending time on the left wing, where she’d drift inside to set up teammates with well-placed passes. The last few years, at Montpellier, she mostly served as a defensive midfielder.

ACFC Head Coach Freya Coombe deploys her as an additional creative force alongside Savannah McCaskill. “I see her as an attacking midfielder,” says Coombe. “I think she's shown some really good qualities, especially in possession. The pass through to Simone [Charley] for the penalty last week was a great example of that. It was perfectly weighted. She saw the run and it was really, really well executed.”

The pass Coombe is referring to, in the 90th minute of the June 11 match against Louisville, wasn’t just a demonstration of Le Bihan’s quality, but of how she fits in with the team’s other midfielders.

The play started with Dani Weatherholt, a more defensively oriented midfielder, pressuring Racing’s Savannah DeMelo into giving up the ball to defender Tyler Lussi. Lussi passed up the wing to McCaskill, who took one touch, turned, and immediately found Le Bihan making a run inside. Le Bihan controlled the ball while sprinting, quickly looked up the field, and played the perfectly weighted, gently curving ball Coombe mentioned directly into Charley’s path. Keeper Katie Lund then fouled Charley in the box for a penalty, which McCaskill converted to win the game.

“I think the more that [McCaskill and Le Bihan] can play and learn about each other, [the better],” said Coombe. “They are quite similar players in terms of looking to find those similar pockets. But I think the combination—they both look to possess and they're both very technical on the ball—means they're able to help possession and break out trouble and be able to create.”

For Le Bihan, the NWSL has been a much-needed change of pace. “It has always been a dream for me to come [to the NWSL],” she says. “When Angel City got in touch, I had stars in my eyes."

Every day here is a challenge, and Le Bihan is welcoming it. “I just want to improve, because I think that even at 27, I have a lot to learn—and I'm learning every day.” She says she still wants to improve her fitness, to be better prepared for the repeated long runs NWSL games often demand.

“I want to use my good qualities to help the team, to express myself, and be—in French we say épanoui.” There’s no single English word that quite captures épanoui as an emotion, but “radiant” or “fulfilled” come close. It’s also the word for “blooming,” as in the thing flowers do.

Her goals aren’t just personal, though. “I want to be an important player here,” she adds. “To build history with the club.”