“We are always looking for pathways to support and promote female athletes and grow the reach of Angel City to deliver more impact to our fans, community and city,” said Julie Uhrman, President and Co-Founder of ACFC. “As the sports community in Southern California has embraced us, we want to give back and highlight incredible young female athletes. By partnering with these young women, who are at the top of their respective sports, we can give them a platform to grow their brands and their likeness and benefit from their support for Angel City FC and our players.”

ACFC worked alongside global sports and entertainment agency Wasserman to secure the contracts that leverage the name, image, and likeness (NIL) legislation passed in 2021. This legislation allows student athletes to receive financial compensation for using their NIL and gives them the ability to market products and services for income.

“We are thrilled to partner with Angel City in their efforts to spotlight and celebrate young women in sport across Southern California,” said Lindsey Fitzgerald, Vice President of Women’s Sports and The Collective at Wasserman. “Through the first year of NIL representation, we have found multiple ways to increase visibility to student athletes and positively impact their careers as a result. This inaugural class of ambassadors will hopefully benefit from the platform and resources ACFC can provide, and we’re happy to assist in making the program possible.”

The four ambassadors will engage with ACFC fans at a community event, volunteer at a service event, and frequently post on their own social media channels to drive awareness of the team via Instagram and TikTok. They will attend home games, be recognized on the video boards, and further interact with fans in the stadium and on social media. They will also participate in content created internally by the team at ACFC and select external media opportunities. Furthermore, they will have the opportunity to intern with ACFC or team partners to gain sports business experience outside of their team roles. 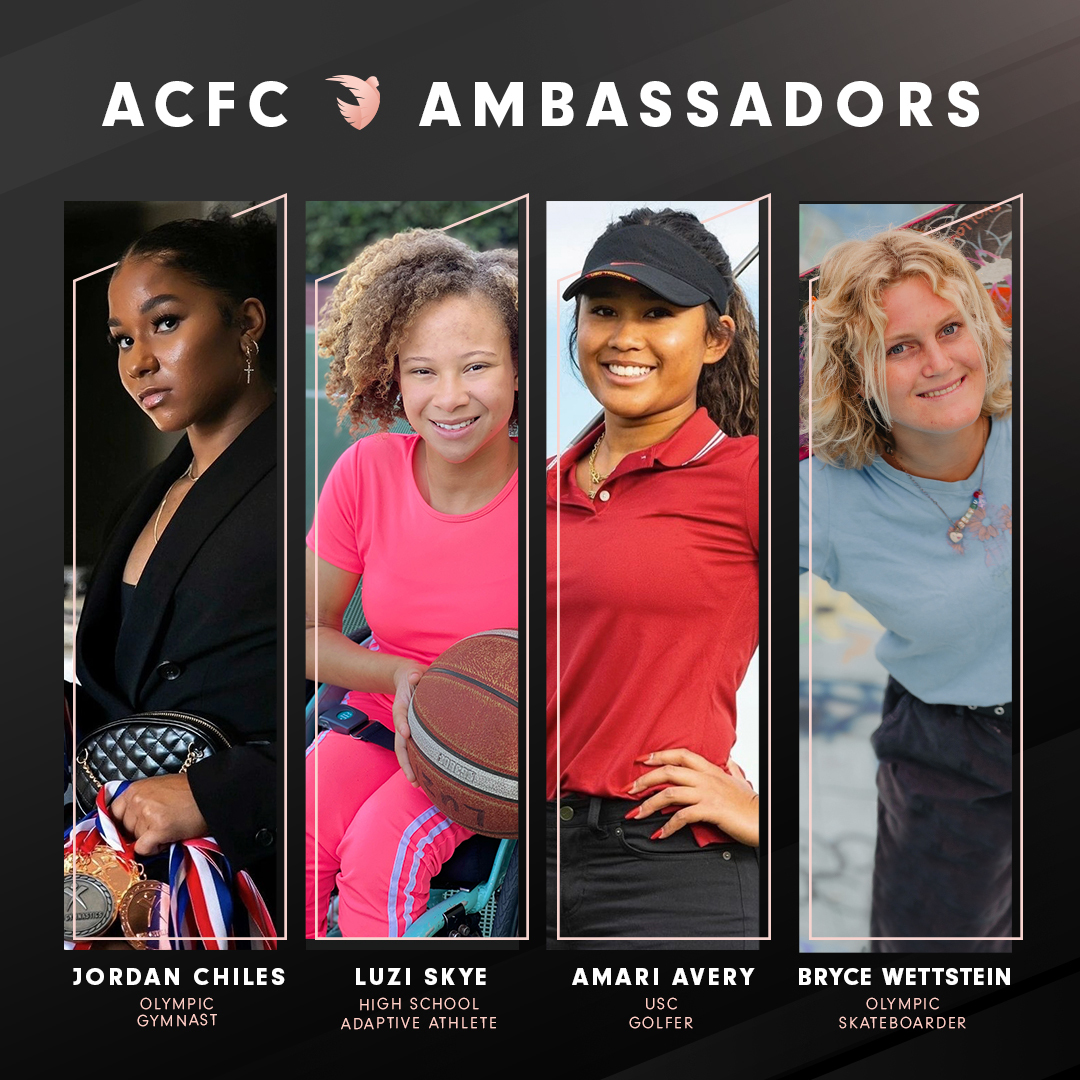 ABOUT THE ACFC YOUTH AMBASSADORS

Coming off of her most recent victory, winning a silver medal at the 2021 Tokyo Olympic Games, Jordan Chiles is completing her freshman year at UCLA, where she scored three perfect 10s in the season and will compete in the NCAA Championship.

At just 10 years old, Chiles qualified for the Junior Olympic Nationals. In 2014, she joined the Junior US National Team and the USA Junior Team, where she went on to help her team win gold for the City of Jesolo Trophy competition in Jesolo, Italy. In 2016, the Tualatin, Oregon native won the all-around title and qualified for all four events, placing first on vault and second on uneven bars at the City of Jesolo Trophy.

In 2018, she traveled to Germany to represent the United States at the DTB World Cup and to Colombia to compete at the Pacific Rim Championships, where she helped her team win the title and earned gold medals for her skills on vault and floor.

In August 2018, Chiles earned a silver medal on vault at the US Championships in Boston. At the 2021 WOGA Classic, she finished first in the all-around and first on vault, uneven bars, and balance beam. Chiles crushed a few more competitions, went 24-for-24 for the season (she was the only gymnast to perform at such a high capacity) and was rewarded in June 2021 when she was named to the USA Olympic Team at the U.S. Olympic Trials in St. Louis.

Only 18 years old, Amari Avery kicked off 2022 by capturing two back-to-back individual victories in her first three collegiate starts at the ICON Invitational and the Gold Rush. These victories came after she graduated high school a semester early to begin her collegiate career at the University of Southern California.

A four-time Rolex All-American, Amari has already competed on some of golf's biggest stages, including the 2021 and 2022 Augusta National Women’s Amateur and the 2021 Women’s U.S. Open. Currently ranked number two on the Golfweek Individual Collegiate rankings and number 23 on the World Amateur Golf Rankings, Avery’s junior golf resume also includes medalist honors at the 2019 California Women’s Amateur, a 3-0 record playing for the 2021 U.S. Junior Solheim Cup team, wins at the 2021 Mack Champ Invitational and John Shippen Invitational, and 2019 SCGA Player of the Year.

Born in Riverside, CA, and raised by her African-American father and Filipino mother, Avery proudly represents her diverse racial and ethnic heritage. Gaining experience in the spotlight, Avery was one of eight junior golfers featured in the 2013 Netflix documentary, “The Short Game,” profiling her journey to the U.S. Kids' Golf World Championship.

Olympic Skateboarder Bryce Wettstein is ranked #1 in the US in women’s park skateboarding. Currently attending high school, the Encinitas, California native has been skating, surfing, and playing beach volleyball since she was five years old and is currently a full-time honor student.

Wettstein placed second at Dew Tour in 2021 and was a finalist in her first and only X Games contest to date. Having competed in the World Cup Skateboarding tour for the past nine years, she is the only girl to have skated in all VANS Girls’ Combi Pool Classics since 2010.

Wettstein is a member of the USA Skateboarding National Team four years running, and is the reigning national champion for women’s park.  She was a member of Team USA in skateboarding’s Olympic debut at the 2020 games in Tokyo. At only 18, Bryce’s first-ever pro model signature board was released in 2022. Beyond competition, Wettstein writes songs on her ukulele—she has original songs available on Spotify—and teaches neighborhood girls to skate in the backyard halfpipe that she proudly built using her own earnings.

Luzi is a 15-year-old from Kansas City who was born with the most common birth defect, spina bifida (open spine). When Luzi was born, her parents were told she would have countless surgeries and a “poor” quality of life. By the age of 6, Luzi had undergone many surgeries and procedures, causing her family to feel hopeless of any bright days ahead. Her parents, however, refused to stay in that dark space of hopelessness and decided to move to Southern California, to a warmer environment for their wheelchair-bound daughter.

A week after the move, Luzi found the Challenged Athletes Foundation. CAF is a nonprofit organization that provides grants and resources to individuals with disabilities. For the first time in her life, Luzi was surrounded by a welcoming environment of kids and adults in wheelchairs and other disabilities and she found hope. Luzi applied for a grant towards a wheelchair that would give her independence, a sense of belonging and a shot at sports. Luzi is now very active in wheelchair skating, basketball, surfing, and track.

Luzi loves a session at the skatepark in her wheelchair and placed second in her division at the WCMX championship in 2018. She also plays varsity wheelchair basketball with the Rancho Halos in Downey, California, who recently placed 14th in the country at the 2022 National Wheelchair Basketball Association Championship.

She is also training in track and field with the intention to join the high school track team and represent the wheelchair community at her school and the city of Irvine. Luzi is best known for her electric personality and contagious smile. Her goal is to give individuals with a disability hope and to show them that they too can dream big and do anything they set their mind to.