After Four Years as a Pro, Savannah McCaskill is Finally in the Right Place

Savannah McCaskill’s introduction to the NWSL was a rocky one. Heading into the 2018 NWSL College Draft, the MAC Hermann finalist out of South Carolina was one of the most highly touted members of her class. She went second, after Andi Sullivan—to the Boston Breakers.

The Breakers are no longer in the league. Just two weeks after they drafted McCaskill, following a failed search for new owners, the club folded. The league held a dispersal draft for Boston’s roster, where the remaining clubs took turns choosing players. In that draft, McCaskill was again chosen second, by what was then Sky Blue FC (last year the club was renamed NJ/NY Gotham FC).

She remembers sitting in her kitchen, listening to the draft on a conference call. “It was like, ‘welcome to the NWSL, I guess.’”

It’s the kind of thing you can laugh about in retrospect, but at the time, that rookie season found her questioning her commitment to the sport—and that was just the beginning of a winding four-year path through four teams and two continents. At least for now, that path has ended in Los Angeles, and a club where she’s finally coming into her own as a pro.

Two statistics from the Challenge Cup encapsulate what McCaskill adds to the team: in that preseason tournament, she led the team in xA, and tied with Jun Endo for passes completed into the box.

xA is an abbreviation for “expected assists,” a statistical measurement that makes more sense if you know about its close companion, xG, or expected goals. xG uses a database of thousands of shots to calculate how likely a given shot is to turn into a goal. It takes into account things like distance, angle, and the positions of the opposing goalkeeper and defenders. Expected assists is equivalent, except it measures the last pass before a shot—a potential assist.

Passes completed into the box tells a similar story. A player with a high number in this statistic is consistently moving the ball into an area that’s dangerous for the opposing team. That often means beating defenders and finding space in the area of the field teams work hardest to defend.

In short, McCaskill is the team’s offensive engine. Her job is to move the ball between the midfield and the forward line, a role that requires passing accuracy, confidence on the ball, and an ability to read the game, among other skills.

Those two stats tell us something else, too: they reflect the fact that for the first time in McCaskill’s five-year NWSL career, she finally has the right balance of responsibility. She’s one of the most important players on the field, but she’s not expected to carry the entire team.

To understand what that means, let’s rewind to her rookie season at Sky Blue. That was a rocky year for her, to say the least. The transition from college to pro is never easy; the speed, quality, and physicality of the game are higher, and players who are used to being the best on their team sometimes find themselves fighting for minutes.

McCaskill’s experience was a little different—she’d gotten her first call up to the full national team right after her last college season, in January of 2018, so she knew what the professional game was like. “I kind of saw that world,” she says, “and knew that my talent had gotten me there. So I knew I was good enough.”

What she wasn’t prepared for was the sudden vacuum of structure that comes with the transition to the NWSL. “You go through college, where you're told what to do, when to do it, you know, your life is basically micromanaged,” she explains, “into a pro setting where you have a job, but no one's going to tell you what to do with the other 10 hours of your day.”

Training is important, but what an athlete does during those remaining 10 hours can have a huge impact on their performance. Nutrition, recovery, and sleep are make or break for elite-level players. “Twenty-one-, twenty-two-year-old me was like, after a game, ‘let's go have some drinks and have a good time,’” she says. “But then that doesn't set you up well for training the next day or two days later.”

Making things even more difficult, the team was having a historically poor season. They would go on to win just one out of 24 games. 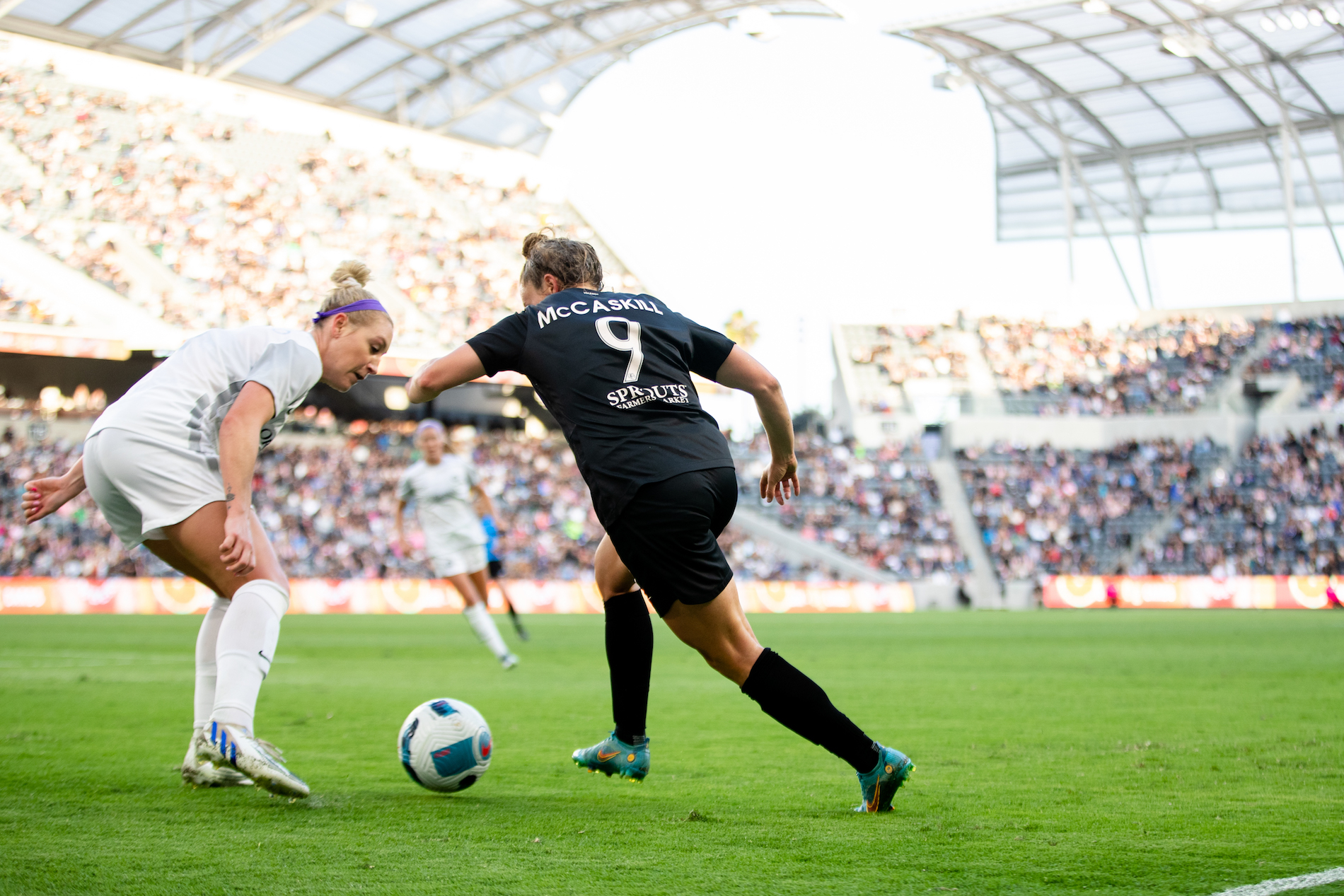 “At that point I was like, ‘Why am I doing this?’” she says. “‘We're not winning games. I don't feel like I'm playing well, there’s no sort of consistency.’ So yeah, that was a really hard year.”

That offseason, Sofia Huerta, who McCaskill knew from national team camps, called and said Sydney FC in the Australian W-League, where she was headed for the winter, was looking for players. McCaskill signed on for their three-month season, where she had an excellent run. She scored five goals in 13 games and notched a brace and an assist in the championship—which Sydney won.

Social media posts from those months are part soccer season, part beach vacation. The W-League doesn’t have the same intensity as the NWSL, but that experience came at the perfect time after a tough season in New Jersey. Having the chance to “focus on just enjoying soccer,” she says—”in Sydney, in the summertime”—helped her remember why she loved the sport.

In June the following season, McCaskill was traded to the Chicago Red Stars, where she’d face a new set of challenges. Where in New Jersey she’d tried to carry a struggling team, in Chicago—a perennial playoff contender—the dynamic was almost the opposite.

“That team was stacked,” she says. At the time, Australian superstar Sam Kerr, the then-two-time golden boot winner, who would again lead the league with 18 goals that season, was the headliner. A mix of veterans in Vanessa DiBernardo, Danielle Colaprico, and Yuki Nagasato, plus Mexican international Katie Johnson, overlapped with McCaskill in terms of position. “I was fighting to get into games.”

The Red Stars ended the regular season in second place and beat the Portland Thorns in the semifinal to get to the championship—only to suffer a brutal 4–0 loss to the North Carolina Courage. Kerr, the team’s talismanic player, left that offseason to sign with Chelsea. Something had to change.

That’s when McCaskill’s mindset started to shift. She realized talent was only going to get her so far—and no one else was going to take responsibility for her career. “I wasn't fit enough to play 90 minutes,” she admits, “which is why I was coming off the bench.”

She buckled down in the offseason, returning to New Jersey to train the basics: first “long-tempo runs, to build that endurance base,” plus regular lifting sessions, then sprints and pickup games as preseason approached.

Then in 2021, the Red Stars traded McCaskill to Racing Louisville.Where in Chicago she’d struggled to get minutes, she was now one of the best players on an expansion team with a largely young roster.

“I would kind of try to take on every role that I possibly could,” she explains. While she’s naturally a creative attacking player—think back to those two stats—in Louisville, she often played as a box-to-box or defensive midfielder.

In one sense, that was a good experience—”I developed a lot as a leader, and kind of found out who I was as a player and what I was capable of,” she says, “but to some degree, that also has limits.”

When Head Coach Freya Coombe and Sporting Director Eni Aluko approached McCaskill about coming to Angel City, “the biggest thing for me is that they both saw me as more of a ten and being able to play in that role,” McCaskill says. “Freya was adamant from the start. She was like, ‘Sav, I see you as a ten. I want you in pockets, I want you receiving the ball, distributing into our front line.’”

Not only is she playing the right role, she’s on a more experienced roster. “I'm surrounded by talented players that I can rely on to do their job,” she says, “which allows me to now stay higher up the field to be able to focus more on the creative aspects, and being able to assist and try to get in front of goal myself.”

That last part is something those two Challenge Cup stats don’t capture: McCaskill can score. She showed that in Australia, and in her college days at South Carolina, she notched 40 goals in 91 games.

Angel City’s first regular-season goal was scored by defender Vanessa Gilles, but if you include the Challenge Cup, it’s McCaskill who scored their first, period, against San Diego Wave FC in both teams’ first-ever game. It was a debut that underscored what she’s capable of—and the role she hopes to play for this club.